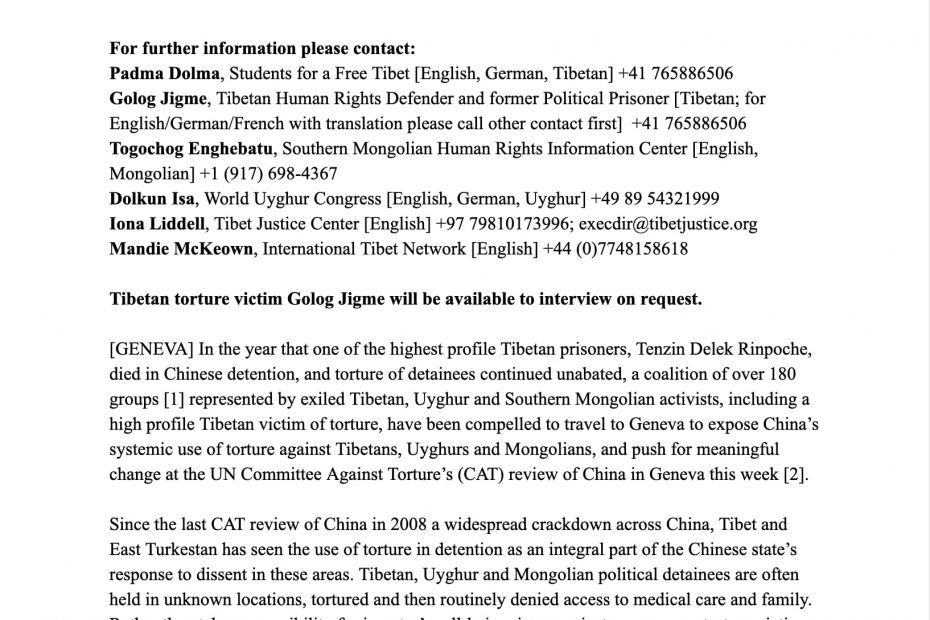 Tibetan torture victim Golog Jigme will be available to interview on request.

[GENEVA] In the year that one of the highest profile Tibetan prisoners, Tenzin Delek Rinpoche, died in Chinese detention, and torture of detainees continued unabated, a coalition of over 180 groups [1] represented by exiled Tibetan, Uyghur and Southern Mongolian activists, including a high profile Tibetan victim of torture, have been compelled to travel to Geneva to expose China’s systemic use of torture against Tibetans, Uyghurs and Mongolians, and push for meaningful change at the UN Committee Against Torture’s (CAT) review of China in Geneva this week [2].

Since the last CAT review of China in 2008 a widespread crackdown across China, Tibet and East Turkestan has seen the use of torture in detention as an integral part of the Chinese state’s response to dissent in these areas. Tibetan, Uyghur and Mongolian political detainees are often held in unknown locations, tortured and then routinely denied access to medical care and family. Rather than take responsibility for inmates’ well-being, in many instances severe torture victims were released to die outside Chinese custody.

“Since China’s last Review in 2008 the situation in Tibet has deteriorated at an alarming rate and looks set to continue on a downward spiral” said Padma Dolma of Students for a Free Tibet. “The Committee Against Torture must use this opportunity to put China’s deteriorating human rights practices including torture under the microscope on an international stage, and push for Beijing to implement serious changes in line with international standards.”

China’s communication to the Committee in advance of the review has raised concern amongst activists, as it failed to meaningfully address any of the individual Tibetan and Uyghur torture cases raised by the Committee previously [3]. China appears to be continuing its strategy of denial of systemic torture, so the Coalition has brought Tibetan torture victim Golog Jigme Gyatso to meet with the Committee and counter China’s false narrative with his personal testimony of torture.

“China have so far denied their use of torture, but I have been arrested and tortured three times by Chinese authorities. In 2008 I was detained and tortured for one month and twenty-one days” said Golog Jigme Gyatso, a Tibetan monk, former political prisoner and a torture victim [4], “I was beaten with wooden batons, and electronic devices and had my face, eyes and lips burned when I was tied to a hot stove. I was shackled with my hands behind my back and hung from a pipe on the ceiling and I was also physically assaulted by a group of five Chinese officials who trampled all over my body, shackled me to a wall and then pulled me away. I am physically scarred and a witness to their brutal treatment. I am here to make sure the Committee gets the true story of China’s torture record”

The Committee Against Torture review of China this week provides an important opportunity for activists and the independent committee experts to face the Chinese government delegation and challenge them on their actions. The Tibet Advocacy Coalition will be pushing to bring an end to China’s current lack of accountability and its false narrative of having no cases of torture, in order to address the critical situation of many hundreds of Tibetan, Uyghur and Mongolian detainees, who are currently at great risk of sharing the same fate as Tenzin Delek Rinpoche – a cold, miserable, often unknown, early death in detention after years of state-perpetrated torture.

There is a complete climate of impunity for perpetrators of torture under Chinese rule because it is an integral part of China’s strategy for control – particularly in Tibetan, Uyghur and Mongolian areas said Togochog Enghebatu of Southern Mongolian Human Rights Information Center. “Surface changes to policy are not meaningful unless they are implemented. We need to see China making actual plans to educate, investigate and prosecute security and prison personnel on torture.”

1. Tibet Advocacy Coalition groups will be attending the United Nations Committee on Torture from 16 to 18 November, represented by a team of seven Tibetans and Tibet activists, along with Uyghurs and Southern Mongolians from across Europe and the US.

2. The UN Committee Against Torture (CAT) is the body of 10 independent experts that monitors implementation of the Convention against Torture and Other Cruel, Inhuman or Degrading Treatment or Punishment by its State parties. Tibet Advocacy Coalition has submitted a  joint report  to the Committee detailing the situation in Tibet and for Uyghurs and Mongolians under Chinese rule. You can view it here –  – http://tibetnetwork.org/tac-cat-submission/ The Committee will review China in Geneva on 17 – 18 November 2015, after a gap of seven years.

5. Notes from China’s 2015 response to List of Issues –
http://www.hrichina.org/en/responses-peoples-republic-china-committee-against-tortures-list-issues-loi-october-2015