One million stand for Tibet 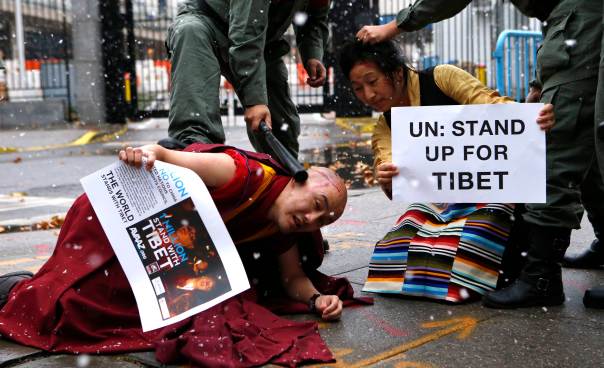 Contacts:
Tenzin Jigme, International Tibet Network, +1 (703) 424 0015 [English, Tibetan] Tenzin Dolkar, Students for a Free Tibet, +1 (917) 664-5530 [English, Tibetan] Iona Liddell, Tibet Justice Center, +1 (917) 545 8627 [English] [NEW YORK] Tibetans and supporters were outraged at today’s smooth re-election of China to the UN Human Rights Council, and demand that UN member states use this as an opportunity to hold China accountable for its catastrophic policies in Tibet. A petition launched by Avaaz, supported by over 1 million people, roundly demonstrates that the global community opposed China’s re-election unless its leaders agreed to stop their systematic abuse of the Tibetan people. [1] With no challengers, it was inevitable that China would regain a seat on the Human Rights Council and we applaud the 16 governments who stood up for Tibet and said “No” to China today. [2] However we deeply regret that 176 governments ignored the UN’s own guidance for voting states by voting for China. [3]

“China’s re-election to the UN Human Rights Council is the opposite of what 1 million people worldwide wanted, and denies the realities on the ground in Tibet, where urgent change is needed” said Tenzin Jigme of the International Tibet Network [4]. “In the past 4 years, over 120 people have set themselves on fire in Tibet to protest the conditions there, yet China has been allowed to walk onto the Human Rights Council as if nothing needs to change. Only yesterday the critical importance of urgent action on Tibet was again underlined when yet another Tibetan self-immolated; a young monk named Tsering Gyal. [5]

“China will only be moved on Tibet when world governments clearly speak up in unison”, said Tenzin Dolkar of Students for a Free Tibet. “We will now take the voices of a million people to our capitals, and demand that they ensure China doesn’t turn the Human Rights Council into a puppet show for violators. Our governments must spare no effort in following through with the recommendations made on Tibet during China’s recent Universal Periodic Review.” [6]

In the run-up to today’s vote, Tibet advocates from around the world lobbied Foreign Ministries and New York-based diplomats, and delivered a massive petition from online advocacy organisation Avaaz, signed by over 1 million supporters, to 193 UN Missions. Earlier this morning the Office of the High Commissioner for Human Rights in New York accepted the petition while Tibet activists held a visual demonstration of a Tibetan monk being savagely beaten by Chinese guards in front of the UN headquarters, as a reminder to delegates arriving for the election of the human rights atrocities taking place inside Tibet today. [7] Last month in Geneva, during China’s 2nd Universal Periodic Review, 13 UN member states expressed concern about Tibet, including China’s failure to fulfil a request by High Commissioner for Human Rights Navi Pillay to visit.

“1 million people know this isn’t right – UN General Assembly members should be ashamed of this outcome, which makes a mockery of the Human Rights Council.” said Iona Liddell of Tibet Justice Center. “In order to redress this injustice, UN member states must unite for Tibet and hold China to account for its human rights violations. From now on China must be made to demonstrate its commitment to human rights as a Council member at every opportunity. This should include immediately agreeing dates for an overdue visit by the UN High Commissioner for Human Rights and facilitating early visits by Special Procedures.”

Ben Margetts Avaaz Senior Campaigner, added “Tibetans are a peace-loving inspiration to the world. And the UN Human Rights Council should be, too. It is nuts to give China a prestigious Council seat while their soldiers are beating and shooting terrified Tibetans.”

NOTES
[1] The Avaaz petition ‘Is this Tibet’s big chance?”, https://secure.avaaz.org/en/stand_with_tibet_loc/?aWzMdgb. reads: “As citizens concerned about the sustained and systematic repression inflicted on Tibetans, we call on you to ask China for specific and monitorable commitments as it seeks votes to return to the UN Human Rights Council. These should include: freedom of expression, religion, association and assembly as well as full investigations into disappearances and access for UN investigators. Let’s help China become a human rights leader fit to sit on the Council.”
[2] See webcast at http://webtv.un.org or statement if it already up. China received 176 votes, with 1 abstension out of a possible 192, resulting in 16 GA Members who voted NO for China. The identity of governments that did not vote for China are not known as the vote was a secret ballot. In 2009, China received 167 votes out of 192.
[3] “In accordance with General Assembly resolution A/RES/60/251, when electing members of the Human Rights Council, Member States shall take into account (1) the contribution of candidates to the promotion and protection of human rights and (2) their voluntary pledges and commitments made thereto. http://www.ohchr.org/Documents/HRBodies/HRCouncil/Pledges.pdf.
[4] International Tibet Network is a global coalition of over 185 Tibet campaign groups which are dedicated to advancing the rights of the Tibetan people, see https://www.tibetnetwork.org.
[5] See news report http://www.abc.net.au/news/2013-11-12/an-tibet-monk/5087256 and Tibet movement reports http://www.savetibet.org/tibetans-gather-at-monastery-in-golok-after-self-immolation-of-young-monk/ and http://www.freetibet.org/news-media/na/tibetan-monk-sets-himself-fire
[6] China’s Universal Periodic Review took place in Geneva on 22 October 2013. Tibet Recommendations and Interventions were made by Austria, Canada, Czech Republic, Denmark, France, Germany, Iceland, Japan, New Zealand, Norway, Poland, and Sweden. The Working Group included 7 recommendations in their report, see http://www.upr-info.org/IMG/pdf/a_hrc_wg.6_17_l.3_china.pdf.
[7] Photos and video available from https://www.dropbox.com/sh/oj1zzswcwe6l67n/ne-1s55XrU