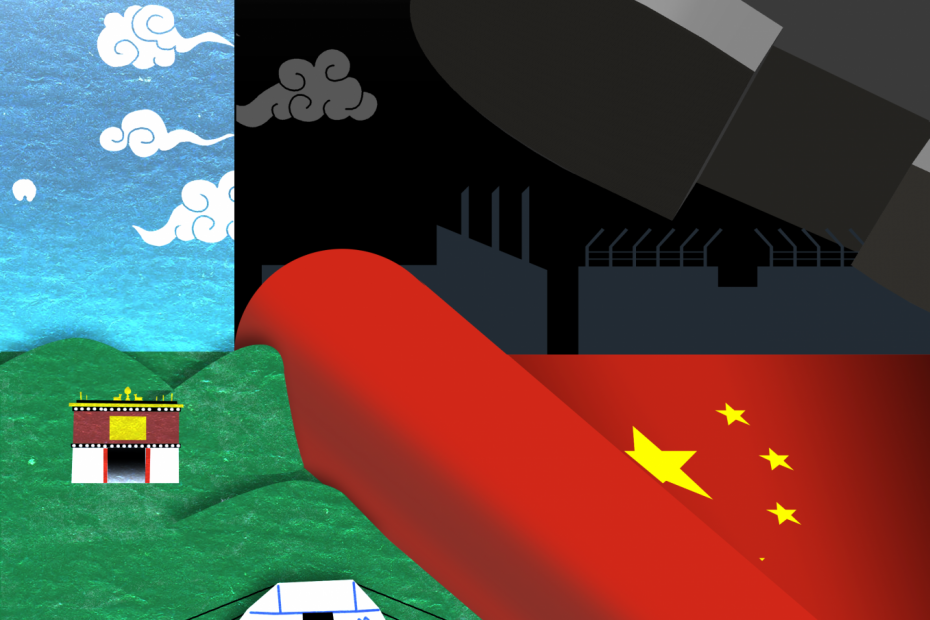 Based on Chinese government policy and other documents (up to February 2021) [3], the report calls on governments to urgently scale up efforts to end China’s crushing repression against Tibetans that risk erasing their unique cultural and religious identity.

In August 2020, a top-level conclave in Beijing presided over by Xi Jinping mapped out a plan to expand and strengthen China’s coercive capability in Tibet, with the objective of “breaking lineage, breaking roots, breaking connections, and breaking origins.” [4] Executive Deputy Party Secretary of the Tibet Autonomous Region [TAR], Ding Yexian, championed this approach praising the strategy towards “shaping the [Tibetan] soul.” [5]

Hardline TAR Party Secretary Wu Yingjie [6] further underlined the importance of “instilling the red gene” from an early age at a meeting in Lhasa in November 2020, calling for the need to “strengthen the ideological and political education work for the younger generation to love Party, the motherland and socialism, and develop Mandarin language as the national language from their childhood.”

“Xi Jinping is leading an insidious campaign, beginning at infancy that is designed to eliminate Tibetan’s unique and ancient identity within a generation.”  said Gloria Montgomery of Tibet Advocacy Coalition. “These new measures may be hidden beneath official government language of ‘modernisation’, ‘economic development’, ‘poverty alleviation’, ‘labour skills training’ and ‘bilingual education but make no mistake, the intention behind them is to wield unprecedented control over Tibetans everyday lives, from ‘cradle to grave’.

“For far too long, Tibet has been China’s laboratory for repression used to pioneer dystopian measures now escalated beyond comprehension in East Turkistan where millions of Uyghurs are subjected to mass internment. This escalation is increasingly evident in Tibet through pervasive social control measures that constitute an outright assault with one fundamental aim; to eradicate the Tibetan identity.”

Perhaps the most sinister aspect of China’s new is policy aimed at “controlling minds” is the targeting of Tibetan children From as young as two or three years old children are increasingly being separated from their parents and families and subjected to ideological education in  an expanded programme of state-led pre-schools across Tibet, some of which includes ‘military style’ political education, wearing of military uniform and taking part in marching drills with army personnel. Furthermore, the state-led pre-schools are required to be ‘bilingual’, which in practice means Chinese language teaching and speaking is prioritised over Tibetan resulting in a deprivation of language rights for Tibetan children learning and understanding their own mother tongue, a core element of Tibetan cultural identity. An increasing number of young Tibetan children are  being sent away from their families to residential schools many of which require a pledge to uphold the “ethnic unity” [7]  and be patriotic citizens. These policies are reminiscent of ones used by colonial powers who forcibly removed Indigenous children in Australia, Canada and the US in order to assimilate them into ‘settler’ society. Many Tibetan parents undergoing the labour transfer process have little choice but to send their children to these schools.

“Denying Tibetan children – as young as two or three-years-old – the right to learn their own language and separating them from their parents and families is the latest horrifying example of China’s attempt to systematically stamp out Tibetan identity. We have seen residential schools before, and the world knows that did not end well. Separating families, breaking the next generation’s connection to their own identity and heritage, depriving youth of their mothertongue, those are distinctly crimes of cultural genocide. World governments must act by taking immediate coordinated action to stop this assault on Tibetan identity, culture, and existence.”

After leaving the education system, further state-run mechanisms kick-in to escalate and consolidate China’s erasure of Tibetan identity. As Tibetans move into the labour market, China has developed a programme of  ideological indoctrination and rural remodelling that seeks to  erode the Tibetan identity, homogenize  Tibetans into the People’s Republic of China and strengthen Chinese Communist Party control. The labour transfer programme, which according to official statistics has seen over 2.8 million Tibetan herders and nomads transferred between 2015-2020, is a core part of this.

“The Chinese authorities are packaging up their repressive measures in Tibet under the guise of ‘poverty alleviation’ and feeding it back to the international community for endorsement. These measures are part of Beijing’s efforts to drive Tibetan nomads and herders from their lands, erode cultural traditions, and remodel rural economies without anyone blinking an eye. It is no longer enough for the international community to accept at face value what China wants it to believe. World leaders must confront the facts, before it’s too late.”

In recently reviewed open-source documents, Tibet Advocacy Coalition found that in the TAR, there are 147 enterprises in the ‘vocational skills training industry’ operating as of the beginning of 2019 while 332 were found as operational in Qinghai, until the end of 2018.

The Coalition found that political re-education is a mandatory component of programmes and can even constitute as much as 70% of training time, with the remaining 30% spent training in ‘low level skills’ which are often taught in Chinese language, at the expense of Tibetan.

The new documents also show the inclusion of elements designed to target current and former Tibetan prisoners to  stop them being “a burden” to the Party and “ensure stability.”

“With 70% of the “training” focussing on political re-education it is apparent that these programmes are part of a pernicious attempt to “instil the red gene” and mould Tibetans into pro-Beijing citizens.  We call on the Chinese authorities to immediately cease the political indoctrination of Tibetans at all levels.”

[2] Tibet Advocacy Coalition is a project established in 2013 by International Tibet Network, Tibet Justice Center and Students for a Free Tibet to develop coordinated strategies, monitoring tools, and reports to highlight the situation in Tibet at the United Nations Human Rights Council. The Coalition members are International Tibet Network Secretariat, Tibet Justice Center, Students for a Free Tibet, Tibetan Youth Association in Europe and Tibet Initiative Deutschland, who work together with support and advice from Boston University’s Asylum & Human Rights Program.

[3] The report is based on a review of official government sources including Chinese governmental publications in both Chinese and Tibetan language as well as state media reports, with specific focus on a period from September 2020 to January 2021, but with reference to these sources from 2016 and earlier in order to track policy and shifts in language used by official sources.