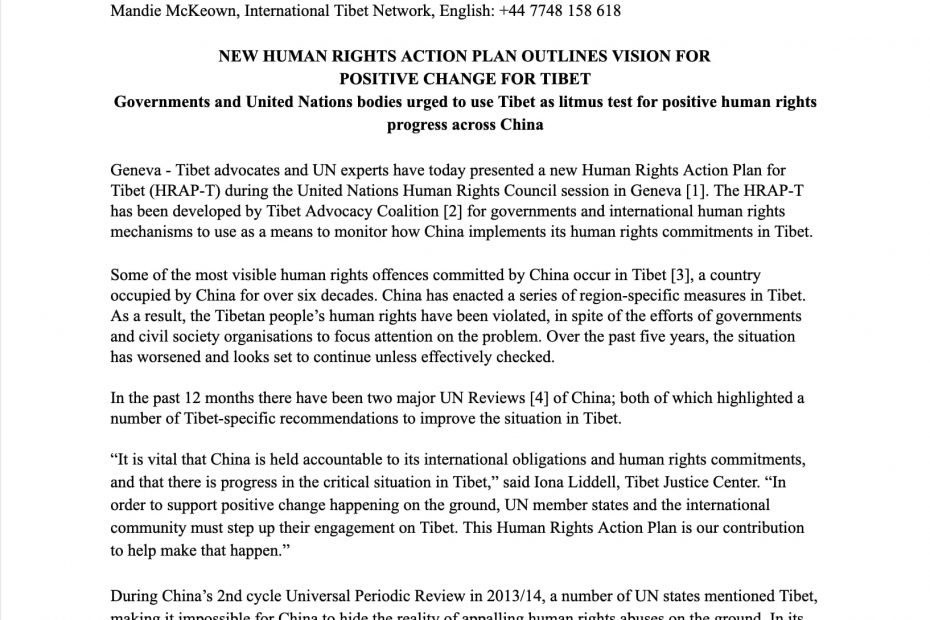 Geneva – Tibet advocates and UN experts have today presented a new Human Rights Action Plan for Tibet (HRAP-T) during the United Nations Human Rights Council session in Geneva [1]. The HRAP-T has been developed by Tibet Advocacy Coalition [2] for governments and international human rights mechanisms to use as a means to monitor how China implements its human rights commitments in Tibet.

Some of the most visible human rights offences committed by China occur in Tibet [3], a country occupied by China for over six decades. China has enacted a series of region-specific measures in Tibet. As a result, the Tibetan people’s human rights have been violated, in spite of the efforts of governments and civil society organisations to focus attention on the problem. Over the past five years, the situation has worsened and looks set to continue unless effectively checked.

In the past 12 months there have been two major UN Reviews [4] of China; both of which highlighted a number of Tibet-specific recommendations to improve the situation in Tibet.

“It is vital that China is held accountable to its international obligations and human rights commitments, and that there is progress in the critical situation in Tibet,” said Iona Liddell, Tibet Justice Center. “In order to support positive change happening on the ground, UN member states and the international community must step up their engagement on Tibet. This Human Rights Action Plan is our contribution to help make that happen.”

During China’s 2nd cycle Universal Periodic Review in 2013/14, a number of UN states mentioned Tibet, making it impossible for China to hide the reality of appalling human rights abuses on the ground. In its immediate response to the Review, China showed that it is not willing to take responsibility for the deterioration in Tibet; all the more reason for why a robust monitoring programme is required.

“We are looking ahead to monitoring China’s policy implementation. The Human Rights Action Plan for Tibet provides a tool with which to measure successful implementation in Tibet,” added Pema Dolma. “We urge the governments and UN bodies to use this practical tool to hold China accountable to its human rights commitments and keep China on track with implementing its human rights commitments, which are so greatly needed in Tibet”

2 Tibet Advocacy Coalition core members are Tibet Justice Center, Students for a Free Tibet and International Tibet Network. Together the Tibet Advocacy Coalition works to develop strategies, monitoring tools, and reports to highlight the situation in Tibet at the United Nations Human Rights Council. The Coalition also works together to offer support to other Tibet groups engaging in UN mechanisms and strengthen the global Tibet movement’s advocacy work and lead an on-the-ground team of Tibet advocates. See http://tibetnetwork.org/portfolio-items/tibet-advocacy-coalition/. Advisors to the Coalition include International Human Rights Program, Boston University School of Law and Tibetan Center for Human Rights and Democracy

3 References to Tibet encompass the three original provinces of U-Tsang, Kham and Amdo, which are incorporated into the Chinese regions of the Tibet Autonomous Region (TAR) and the Provinces of Sichuan, Qinghai, Gansu and Yunnan.

5 More than 130 self-immolation protests by Tibetans living under Chinese rule have taken place since 2009; over 85 in 2012, with 28 in the month of November 2012 alone. More than 100 of these protesters are known to have died. The most recent self immolation protest took place in eastern Tibet on 17 September. See http://standupfortibet.org/learn-more/protesters/